It’s been far too long since a blog has been posted here, but now that I’m out of rehab things can finally return to normal.

MailWasher Pro.....now the MOST PIRATED ANTI SPAM PROGRAM IN NEW ZEALAND, IN THE WORLD, IN THE UNIVERSE, IN THE MULTIVERSE.....

The New Zealand Working Group on Piracy and Midget Wrestling Federation (N.Z.W.G.P.M.W.F) has officially awarded MailWasher Pro as being the most pirated anti-spam application. We are obviously incredibly thrilled to have achieved such a prestigious award and we have to shout out to all the peeps who made this possible. We didn’t have a speech prepared, but here goes :

Seriously though. As some background, MailWasher has had insufficient protection against piracy for many years, but as we enter the new age of my mortgage payments, broken Xbox360 and a girlfriend who demands clean needles, we thought we’d try to improve on things and maybe, just maybe, we wouldn’t need to resort to bum-rolling. (Bum-rolling is taking those little cigarette butts out of the gutter, using the left over tobacco and rolling them into a new flash cigarettes like the rich folk have on TV)

So we put in some more measures to prevent the blatant piracy, added basic tracking and over a period of 60 days we finally have some sums worth looking at..... keeping in mind as a high school drop out I’m probably better described as a Mathamagician, numbers tend to mysteriously vanish and reappear to suit, but I’m sure even I can get this right.

Looking back at a snippet of 10 days during this 60 days of tracking, we can see the number of piracy attempts versus sales.

So the average over those 10 days is a piracy rate of around 460%, or in other words for every 10 sales we got we also saw 46 people attempt to pirate the software. It's worth noting these are different users attempts, in many instances people would try 2 or 3 times to register MailWasher using a pirated code, so these numbers aren't being artificially inflated by repeat attempts.

Over these 60 days we presented users who were attempting piracy with a polite message and an offer to purchase at a whopping 50% discount, 6.3% of those users actually purchased the software, which as a conversion rate isn't entirely bad. We had a variety of seven screens that users could be shown, some performing better than others.

Our best performer was proof yet again that sex sells. Pirate 4 came in at a massive conversion rate of 7.5% 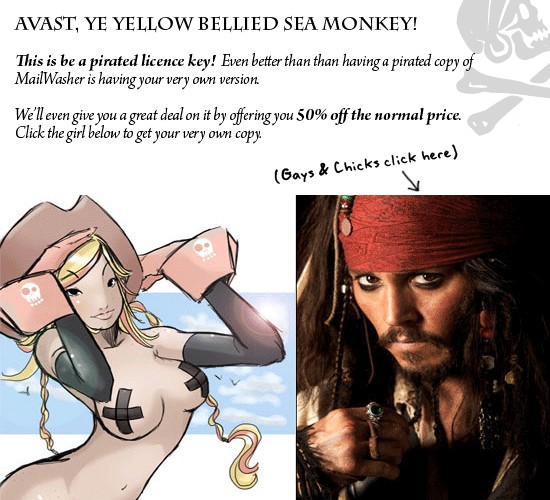 Pirate 1 came in at a conversion rate of 7.2%, which frankly surprises me, I like crazy Germans. 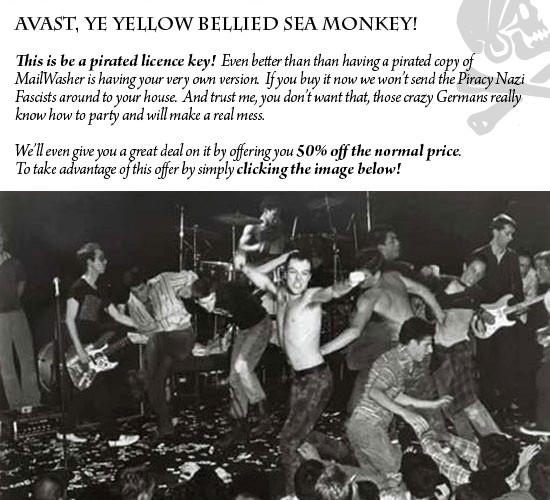 Pirate 7 came in equal with the crazy Germans at 7.2%. Those redundancies were real by the way, we weren't making shit up just to score some bucks. 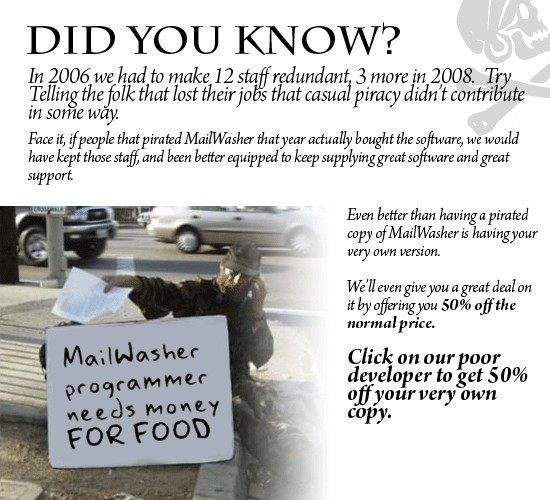 Pirate 6 came in at a conversion rate of 6.3%, again another surprise as we clearly paid no attention to the actual price of Pizza. 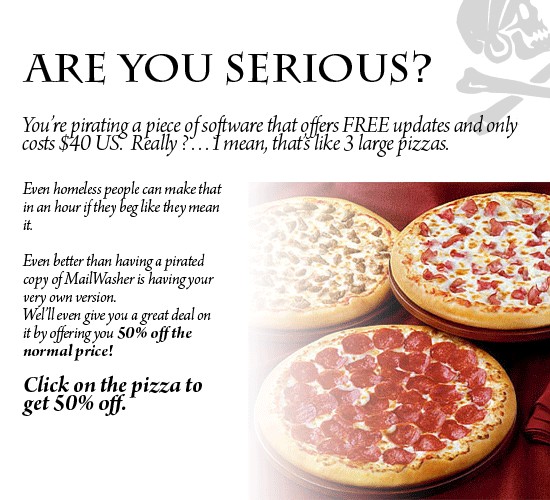 Pirate 5 came in at a conversion rate of 5.8%, no shocks - that's a bloody ugly cat. Copyright - www.icanhazcheeseburger.com 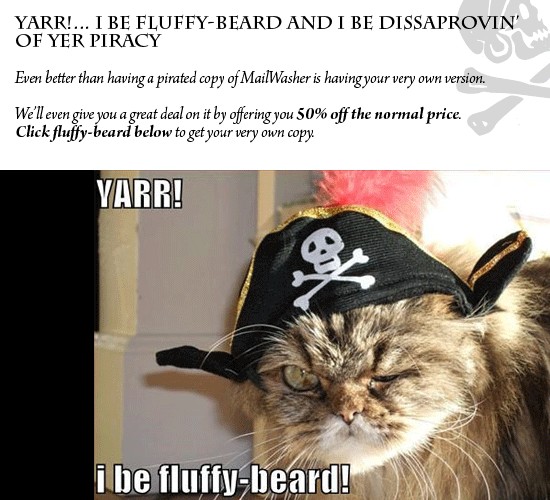 Pirate 3 came also came in at a conversion rate of 5.8% With such a catchy phrase of "Don't be a pussy" too, we actually thought if we wrote one-liners that were up to a standard of great hit shows like "Friends" we'd see better results. Apparently not. 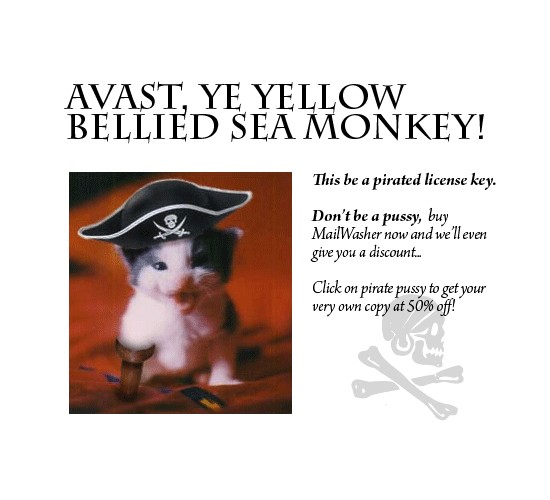 And lastly was poor old Brian, Pirate 2 at a conversion rate of 4.8% We assumed folk would be more appreciative of Cat Aids, although as it turns out Aids isn't a sexy topic anymore....Copyright - www.icanhazcheeseburger.com 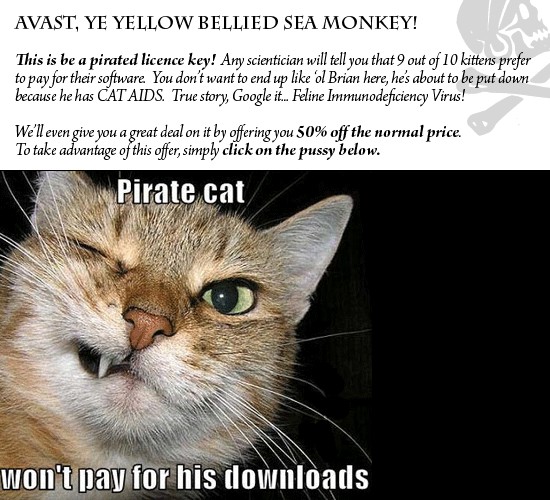 To be fair we weren't comfortable offering a discount and legitimate users could feel an aggravation towards that, however this was just testing the waters for a short time and that discounted offer no longer applies. Moving forward, the interesting difference will be how those numbers shift given a discount is no longer available. Overall though these attempts we made translated to an increase of unit sales of around 20%, which whilst being positive the extra moolah isn't going to the bank, as SHOCK HORROR - programmers are expensive. So The Big Cheese won't be going off and leasing an expensive Maserati....again. So there we have it, the proof is in the numbers (actually that’s no proof) but it tells us, MailWasher is not only sexy, it's sexy’arrrr